The Brisbane chapter of the Australian Zeitgeist movement has been visiting communities near to Brisbane to analyse what it takes to make a community and what factors make communities work. The latest visit was 1,600km, well outside our usual visits and comfort zone. We had the opportunity to meet with another chapter, Adelaide TZM, which while it may seem like a regular occurrence for some international chapters, was a mastery of the “tyranny of distance” Australia enjoys. 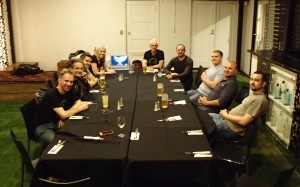 The tour was organised not without complaint, due to the $40 fee per human participant. Given our large numbers, -Simon Cole- did try to reduce it somewhat. But that $40 fee seemed to be part of the external resource acquisition model for the community in question, which does bring into play what factors make a community truly sustainable in the long run. 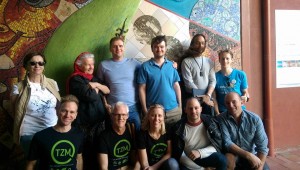 The tour was pre-buttered up with snacks and the promise of more to come, which seemed to quiet the masses of which we now numbered around a dozen. The walkway into the community was impressive, with a large tunnel entryway built to handle trucks, and adorned with artwork depicting the history of Christie walk. The entryway was not only aesthetic and socially gathering in nature, it helped physically support the final addition to the community, a 5 storey apartment block that served as the main living abode, the shared communal room and the fully functioning shared “laundromat”. 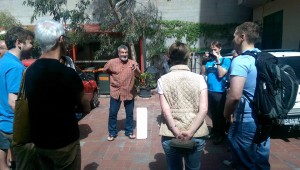 The first place we were shown was one of the largest ( and first constructed) houses towards the rear of the block. The usual residents were away and had generously allowed us to inquisition their lifestyle. I was immediately taken aback by the warmth of the interior, both in a scale of Celsius and of the soul. The back yard was ornamented by a food and aesthetic garden. My personal favourite decoration was the old rusty tuba light fitting hanging from the upstairs room supports. I must admit I have a slight soft spot for unorthodox garden decorations and the musical instrument I played in my last years of high school, which was the tuba. The most impractical of all instruments bar the piano. 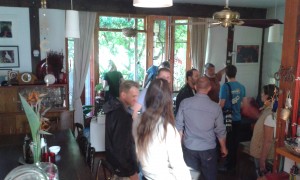 The high set support beams were made from reused Oregon timber from a nearby warehouse, more than enough to support the structure, beautifully reconstructed and preserved, as if deliberately within a museum. The walls were especially thick, constructed of concrete and plaster sealed compressed hay bales with a layer of hebel (autoclaved aerated concrete) to give support more than insulation. The double glazing and door/window seals combined with the natural 3 storey design gave enough insulation to the house that even in the worst 4 day heat waves Adelaide has to offer the house only required ceiling fans and not air conditioning. While not “mud, organically grown hemp brick and sawdust” the house offered a balance between the modern consumer culture construction materials of down-town Adelaide and living in a hand thatched stick house designed to be constructed on an income of less than $2 a day. Paul Downton was the architect of this house. 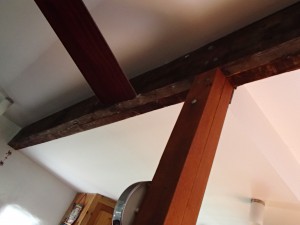 There are a few things to be said specific of Adelaide housing that do not apply to many other areas. For a seaside city, it suffers huge heat extremes. From sleet (minimal snow) during winter, to blazing hot winds from the deserts of central Australia, the temperature can vary from -3C to 45C in as little as a week. The Australian natural disasters it does avoid are flood (its sea side and flat), earthquakes and cyclones (hurricanes/tornadoes/typhoons). It does have very reactive soils, 1.5m rise/fall seasonally is not unheard of. Building a solid foundation and a steel-reinforced concrete slab have overcome this, but of course this detracts from the sustainability of the construction. The house in question, however, has a >100 year lifespan, eclipsing modern Australian building techniques by 60 years. 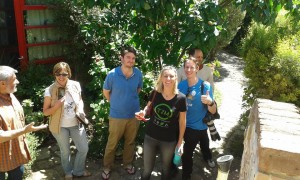 The next question is what happens once people actually have to live there? Well, the orchestrators of Christie Walk do have a lot of help from those thick sound-insulating walls. But of course whenever they venture from those walls into their community, problems do occur. The community does have a “conflict resolution process” documented, but they haven’t actually had to use it yet. That appears to be because the housing is so well set up and the initial participants were so well matched. However, it’s also because only the well-educated and affluent can afford to live there; those who (in this case) happen to be stable and attracted to a sustainable lifestyle. As the older residents move to retirement homes and the younger generation inherit their share of the land, so does the torch of responsibility pass on. 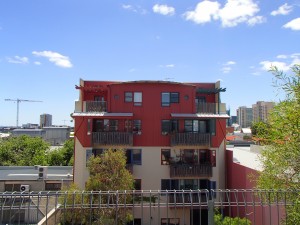 The property “ownership” and “stewardship” are very much tied to the current economic system just like the building approvals were. The land is owned within 3 corporations. The first was the owner of the whole block and the purveyor of the land to the first stage of construction, the separate apartments at the rear of the block. The second corporation was established to build the second stage, the rear adjoined housing. The final stage was a corporation to construct the 5 storey apartment block at the front of the premises . Each corporation is required to hold annual general meetings and report income to the Australian Tax office. The corporations are “strata community title”, something unique to New South Wales and South Australia, although NSW has effectively wiped new titles under this scheme in 2015. 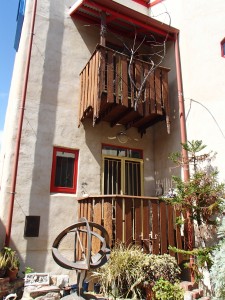 The succession plan of this community is to some extent at the mercy of the dollar, in that the inheritants of the community who are not necessarily interested in living there, can easily sell their space on the open market. Free market speculators come along, buy and sell shares and alter the members of the community to feed their own profits. The market profiteers will slowly but surely fill the tenancies with whomever can pay, rather than whoever is best suited to add value to the community by living there. This community is subject to that, because the community corporations can’t legally decide who can or can not live there so long as they can afford to buy a share.

The occupants are not a random demographic of people. Far from it, simply to afford to own even a shared premises in an Australian city one needs between $200,000 and $1,000,000AU. Furthering the narrowing is the fact that almost all the current occupants have university degrees in varied backgrounds. This excludes the lower socio-economic class from the community, as does everywhere else within the CBD of a major Australian city.

The self sustainability aspect of this community has risen above the purely economic means of the participants, who could easily afford to simply buy everything they need within walking distance. Much of the food and energy needs are met within the community itself. Numerous gardens including a spectacular rooftop garden for stage 2 (including 2 bee hives ) demonstrate the goal of self sufficiency within this community. There is ample solar hot water and photovoltaic systems, although the residents do pine for an excess to sell onwards to the grid, and there was no apparent energy storage or “island-mode” electrical systems installed to allow true energy self-sufficiency.

As an interesting side-note, many of the occupants consider themselves “klepto-parasites” borrowing or “unauthorised borrowing” whatever they can to reuse the waste the rest of the city can’t be bothered to use. The rented properties are popular with Flinders University professors and postgraduates, adding to the intellectual discussions in the common room for the duration of their intern-ships. The members of TZM (well Simon Cole actually) gave a great introduction to what we are all about to the community over a delightful lunch put on by the members of Christie Walk themselves. We seeded the idea of vertical hydroponics in place of a simple vegetable patch that would produce much more for them. 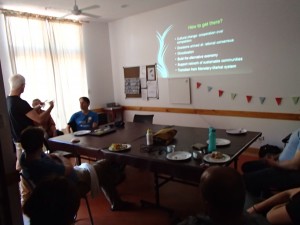 The community laundry, I have found, is the most interesting part of the tour, if not the most pleasing to the eye. Communal bicycle, recycling, gardening and eating all take a rear seat to this as far as I am concerned. The community collectively , without an actual leadership, decided to establish this model. It worked without some members wanting to be involved, yet once established, everyone has used it. Its principals are simple. Collectively buy a washer and a dryer so good, so industrial, that it sits outside planned obsolescence and is easy to repair should it break. Share collectively its use, repair, upkeep and replacement. This dull white room was the most hopeful part of the entire tour for the engineer inside me, even if its doesn’t make for a good closing statement.

So I will end with this: economically entangled systems of community do exist within Australia and they do work, but without our support and participation they will be lost to ideas such as inheritance, ownership and council planning. It is up to each one of us to support and learn from such models if we are to build a larger and therefore more sustainable earth-wide community within our current paradigm of the developer-capitalist-built city.